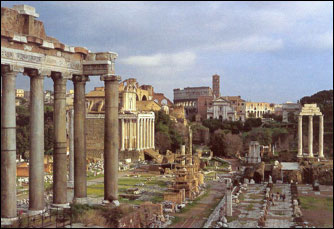 A. The Foundation of Rome

1. Chronology Highlights
1. 753 B.C.- the founding of Rome, coming of Romulus to the Palatine Hill and the Hut Urns
2. 616 B.C.- Etruscan invasion of  Rome from Etruria
3. 509 B.C.- creation of the Roman Republic
4. 3rd and 2nd centuries B.C. Punic Wars with arch rival Carthage
5. 31 B.C.- Beginning of the Roman Empire under Augustus

B. The Roman Forum- gathering place of Roman people for religion, government, fests

1. The Curia, House of the Vestal Virgins and The Comitium
2. The Temples- Temple of Castor and Pollux, Temple of Saturn
3. The Regia - Home of the Pontifex Maximus
4.  The Tuscan Temple form
5. The Basilicas
6. The Temple of the Deified Julius Caesar
7. Mark Antony's Oration

A. Roman Wall Decoration- based on discoveries at Pompeii

B. The Roman Government

B. The Roman Legions

A. Problems of the First Century B.C.

B. The Rise of Julius Caesar

B. 41 B.C.- Planned demise of Cleopatra by Antony

1. Cleopatra sails to Tarsus in pleasure barge to seduce him
2. He goes back to Egypt with her! Twins are born named Cleopatra Selene and Alexander Helios
3. She murders her own sister Arsinoe!
4. How did Cleopatra seduce  Antony?

1. Returns to Antioch, summons Cleopatra for permanent relationship
2. Octavia stays in Italy 39-37 B.C. where she raises his two daughters by her!

1. Recognizes his two children by Cleopatra and has third
2. Ptolemy Philadelphus
3. Cyrenaica added to Egypt
4. Antony advertised as Dionysus/Osiris (Plutarch)
5. Cleopatra is Aphrodite/Isis

1. The Donation of Alexandria
2. All lands Alexander ruled will be under their sway
3. Hellespont to Indus given to Cleopatra and children
4. Caesarion officially recognized as son of Caesar
5. Cleopatra and Caesarion are rulers of Egypt and Cyprus
6. Alexander Helios is king of lands east of Euphrates
7. Ptolemy Philadelphos is king west of Euphrates
8. Cleopatra Selene is queen of Cyrenaica
9. Octavian is outraged and inflames Rome- master propaganda maker

I. 31 B.C.- The Battle of Actium- disgrace of Antony and Cleopatra

Guide to the Roman characters:

1. Julius Caesar - conqueror of Egypt, ruler of Rome, who has installed himself in the palace of Alexandria where Ptolemy XIII rules
2. Ptolemy XIII- pharaoh of Alexandria who has banished his sister and coruler Cleopatra to the desert to die
3. Pothinus- Ptolemy XIII's chief adviser, who plots against Julius Caesar and hates Cleopatra.
4. Cleopatra- co-ruler of Egypt, condemned to exile in the desert, she conspires to return to Alexandria and throw herself at Caesar's feet while wrapped in a Persian carpet.
5. Apollodorus of Sicily- Cleopatra's trusted mentor and adviser who poses as a merchant and delivers her in a rug at Caesar's feet
6. Calpurnia- devoted wife of Julius Caesar back in Rome while he dailies with Cleopatra and all Rome gossips
7. Mark Antony- Julius' Caesar's friend and master of horse, hero of the Gallic Wars for Caesar, and a fierce drinker and powerful man
8. Octavian- later to be known as Augustus, he is a crafty but frail young man who complains of Antony's dallying in Egypt and secretly plots to rule Rome
9. Octavia- sister of Octavian and used as a pawn in political alliances, she will eventually be asked to marry Mark Antony and bear him children
10. King Herod the Great- the treacherous King of Judea, who is a friend of Antony but yet cautions Cleopatra that she can save Egypt by poisoning Antony!