lntroduction: The Greeks of Athens

A. Chronologies- Bolded words are considered most important

b. The island of Crete (Knossos) - King Minos, thalassocracy

c. The island empire of Thera and the Myth of Atlantis

d. The warrior aristocracy of Mycenae and the Trojan War

e. Who were Frank Calvert, Heinrich Schliemann and the poet Homer (not that Homer at the far right below)

3. 675 B.C.- 600 B.C.- The Orientalizing Period- influence of eastern cultures such as Assyria and Phoenicia

Athens as a powerful democracy

B. Key Concepts and Terms of the Archaic Period:

B. Major Events of the Golden Age of Athens

C. The Development of the Athenian Agora (market place) and its Buildings

1. Headquarters of the Democracy based on the Deme
2. The Boule- Athenian Council Chamber
3. The Temple of Hephaistos
4. The Stoa
5. Ostracism

* The Propylaea
* The Parthenon- most important Doric Temple of the Greeks in Athens
1. Parts of a temple- know this
2. The Column- base, shaft, capital
3. Entablature- architrave, triglyphs and metopes, pediment
4. Refinements- Entasis, diminution
5. Color scheme
* Other types of Greek Temples- the Ionic and the Corinthian
* Dr. Soren tries to build a temple on the island of Cyprus in the ancient city of Kourion--

2. Polykleitos- the canon of proportion of ca. 440 B.C. in the Classical Period (500- 300 B.C.)
a. The Doryphoros or spear bearer naked athlete statue
b. Contrapposto- knowledge of weight shift of human figure

G. The Panathenaea or Festival of Athena

H. Development of the Greek Theater

1. The Great Dionysia
2. The development of tragedy
1. The choregos and the chorus
2. Thespis
3. Aeschylos and the Oresteia-- Agamemnon

I The Form of the Greek Theater

1. The Theater of Dionysus at Athens
2. The Theater at Epidauros
3. The skene
4. Proskenion
5. Orchestra
6. Theatron
7. Paradoi
8. Odeon

J. Elements of the Greek Tragedy

1. Pride goeth before a fall-- the problem of hubris
2. Problems of the rich and famous in royal halls
3. Conflict of young and old, particularly in Euripides' plays
4. Symbolism and Imagery
5. Inscrutable gods
6. Chorus knows the proper way to behave, protagonists do not
7. Morality plays- plot is known to audience, but play is innovative in staging and presentation of moral instruction

Lecture 3: The Films of Dorothy Arzner 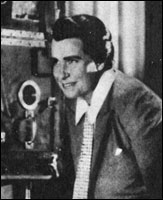 B. Innovations and Discoveries

1. Morality Plays- deeply religious I was led by the grace of God to the movies", Christian scientist
2. Christian Scientist- seeker of wisdom, courage conquers death
3. Fascination with Ancient Greece
1. Art History student at the Westlake School
2. Greek Revival Home
3. "All my films are Greek tragedies"
4. Fascination with Sophocles' Antigone

1. Oedipus has sons Eteocles, King of Thebes, and Polynices who attacks him
2. Both die in single hand to hand combat - 7 Against Thebes
3. Creon, the new king of Thebes buries Eteocles with honor
4. Declares death by burial alive to whoever buries Polynices
5. Sister Antigone wants to defy Creon and her own sister Ismene
6. Creon's son Haemon loves Antigone and kills self with sword
7. Chorus warns Creon about the situation but he doesn't heed them
8. Two kinds of Greek women- traditional and independent
9. Wisdom through suffering
10. Animal imagery, particularly birds
11. Obedience to man's law versus obedience to higher law
12. Generation gap-classical Greek vs. Late Classical Greek 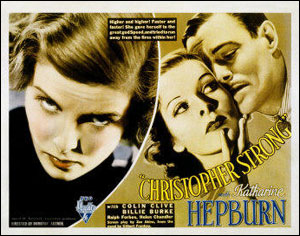 A. Dorothy Arzner's Versions of Sophocles' Antigone in Modern Guise

1. Arzner is the only Greek Revival filmmaker

B. Parallels to Sophocles' play:

1. Akropolis of Athens replaced by Akron in Ohio
2. Obedience to traditional law versus higher law - which is the right thing to do?
3. The Role of the Woman
1. Independent women- Lady Cynthia Darrington (Katherine Hepburn)
2. Traditional Woman- Lady Strong (Billie Burke)
4. Warning chorus- voices of reason and calm unheeded
5. Hubris --pride goeth before a fall
6. Morality Play- curse on families through generations
7. Wisdom through suffering- Cynthia Darrington's final action
8. Animal imagery- the Giant Moth! Burns when too close to flame
9. Individuals blind to the consequences of their actions like Oedipus
10. Irony- something appears to be the case but the opposite is true
11. Strong sense of fate and destiny- chance meetings, missed connections

C. Arzner's Personal Life- Is it relevant to her art?

1. Feminist perspective- strong woman dominates weak men, yet Arzner hates feminists, women are complex, men driven by base desire, parallels with Aristophanes' Greek play Lysistrata
2. Sensitivity to the plight of women in a man's world of the thirties-makes a superwoman, influence of Isadora Duncan, Marion Morgan and Classical Dancing

1. Great attention to detail- associations with animals, classical names-- not acroplis but Akron, Ohio (!)
2. Nuance and gesture to reveal character- Darrington's treatment of the dogs
3. Opening Scene- the Sense of Fate, Destiny, the Gods Apollo and Venus
1. Influence of the Lysistrata- women with dazzling power over men but men run the world or think they do
2. Apollo as leader of the 9 muses, patron of the arts
3. Rich youth in depths of American Depression of 1930s
4. Men as impulsive lecherous drunken jackasses
5. Ironic statements- dance teacher talks of destiny then dies suddenly
6. Role of Chance or Destiny- inscrutable gods watch us mortals
7. The Chorus- Voices of quiet, calm and simple.
4. Written and Directed by women (Tess Slesinger and Dorothy Arzner) and starring Lucille Ball and Maureen O'Hara
5. Tess Slesinger- Are Men Really Necessary?, Girls School, The Good Earth, powerful feminism before the movement formally existed, dies of cancer at 39.

Arzner began as a film cutter at Paramount Pictures and edited silent movies. By 1922 she was directing sequences in films, such as the bullfight scenes for Rudolph Valentino's legendary Blood and Sand. As writer and director in 1927, she made a surprise hit with Fashions for Women and continued with a string of successes, usually featuring female stars. She discovered Katherine Hepburn who had already worked with limited success in A Bill of Divorcement, for George Cukor. Hepburn had been relegated to a jungle movie at the time and was found by Arzner at RKO climbing a tree when she decided to cast her into Christopher Strong.